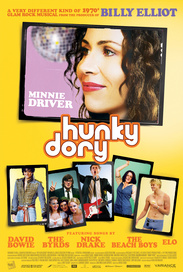 It's the summer of 1976, and in this glam rock-infused musical from the producer of Billy Elliot, Minnie Driver plays Viv, a fiery teacher determined to fire up her apathetic students by putting on the greatest end-of-year-show the school has ever scene: a concept rock opera version of The Tempest.

Filled with songs from David Bowie, The Beach Boys, Rush, ELO, and more, all performed and sung live on the set by the talented cast, HUNKY DORY will have you smiling, singing along, and (if you're like us) wildly clapping a half hour before the film is even over.