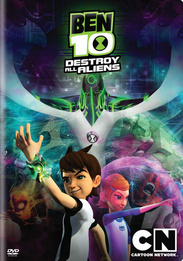 The biggest franchise in Cartoon Networkâs history is taking Ben 10 to another level with the DVD release of the original CG animated movie Ben 10: Destroy All Aliens. This DVD includes the all-new movie plus over 2 hours of special features with behind-the-scenes, original artwork, commentaries and more. In the movie ten-year-old Ben Tennyson is back from summer vacation. He jumps at the chance to go to the Total Alien immersion training program, but total immersion means he can never turn human again. Stuck in his alien form, Ben becomes the target of a new evil alien, engaging in a deadly cross-world battle where nothing is as it seems. Complete your Ben 10 DVD collection with the Ben 10: Destroy All Aliens DVD.