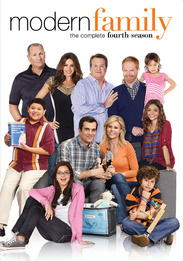 The laughs â and the awards â just keep on coming for the #1-rated Modern Family, winner of three consecutive EmmyÂ® Awards for Outstanding Comedy Series! With Jay and Gloriaâs baby on the way and Haley going off to college, the entire Pritchett/Dunphy clan faces some major surprises as they bicker and bond over house-flipping headaches, unwanted play dates, and everything from hot-tempered hormones to in utero karaoke. Featuring a stellar array of guest stars including Matthew Broderick, Shelley Long and Elizabeth Banks, Season Four takes a heartfelt and laugh-out-loud hilarious look at what it means to be a Modern Family.