Someday This Pain Will Be Useful To You 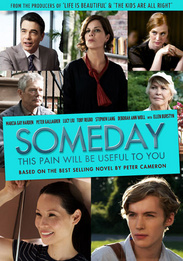 Extraordinary newcomer Toby Regbo (One Day, Angelina Jolie's upcoming Maleficent) stars as James, a precocious yet vulnerable high school graduate at a crossroads. He has a deep appreciation for the world, but no idea how to live in it. Receiving no help from his divorced parents (Marcia Gay Harden of Pollock and Mystic River, Peter Gallagher of The O.C.) or his 20-year-old memoir-writing sister (True Blood's Deborah Ann Woll), James decides to reject the adult world.

He refuses to leave for college, despite being accepted by Brown University, and cares about nothing - except visits to his free-spirited grandmother (Ellen Burstyn, The Exorcist, Requiem for a Dream) and a life coach (Lucy Liu, Elementary, Charlie's Angels), the only ones who seem to understand just how lost a restless and confused a 17-year-old can feel.