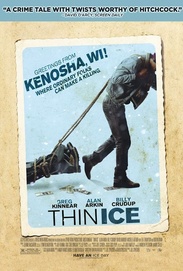 Mickey Prohaska (Greg Kinnear) is a small-time insurance agent looking for a way to jump-start his business, reunite with his estranged wife (Lea Thompson) and escape the frigid Wisconsin weather. This self-proclaimed master of spin believes that salesmanship is about selling a story â all he needs is a sucker willing to buy it. He hits pay dirt with a lonely retired farmer (Alan Arkin) who is sitting on something much bigger than an insurance commission. But Mickeyâs attempt to con the old man spins out of control when a nosy, unstable locksmith (Billy Crudup) with a volatile temper dramatically ups the stakes, trapping him in a madcap spiral of danger, deceit and double-crossing. Blending dark comedy and delirious Midwestern noir, THIN ICE reaches a breaking point that no one â least of all Mickey Prohaska â could ever see coming.