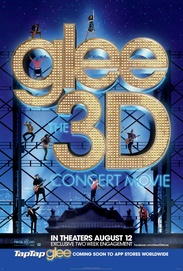 Hereâs your front-row seat to a thrilling concert performed by the phenomenally talented cast of Glee. See your favorite stars from the hit TV show as they sing the songs you love and dance up a storm on stage. Get swept up in the energy of âGlee Liveâ -- including performances not seen in theaters and exclusive interviews!

Rated PG for thematic elements, brief language and some sensuality.