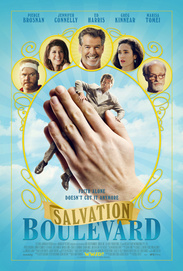 SALVATION BOULEVARD is a tongue-in-cheek look at a charismatic larger-than-life evangelical preacher, Pastor Dan Day, whose charm - and real estate developments - have captivated a small western American town. Part satire and part parable, the film is based on Larry Beinhart's comic novel of the same name.

Carl (Greg Kinnear) is a former follower â not of Christ, but of the Grateful Dead â who has since become âfoundâ in Danâs Evangelical community, serving as one of the preacherâs great examples of spiritual and moral transformation. After a late night confrontation with a best-selling atheist professor (Ed Harris), Carlâs new belief system is upended, leaving Pastor Danâs doughy henchman (Jim Gaffigan) to cover up an increasing series of âsinful actsâ.

As much as he prefers to âgo with the flowâ, Carl finds himself on the run, torn between two women: Honey (Marisa Tomei), a security guard who still longs for the Deadhead days; and his militantly devout wife Gwen (Jennifer Connelly). While a major groundbreaking and a chastity ceremony hang in the balance, only time â and perhaps God â will tell if the right or righteous man will prevail.