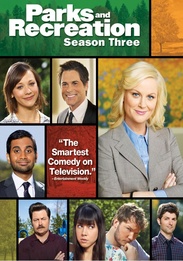 Dedicated government employee Leslie Knope (Amy Poehler) and her fellow colleagues return for big laughs from the small town of Pawnee, Indiana, in the hilarious third season of Parks and Recreation. Their funny antics continue as they ramp up for their most important civic project yet: The Harvest Festival. As Leslie plans, prepares and publicizes, her co-workers take on other challenges such as a crippling flu, the statewide softball tournament and the sad demise of a local icon: a miniature house named Liâl Sebastian.