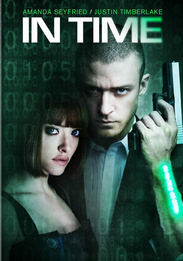 When Will Salas is falsely accused of murder, he must figure out a way to bring down a system where time is money -- literally -- enabling the wealthy to live forever while the poor, like Will, have to beg, borrow, and steal enough minutes to make it through another day.

Rated PG-13 for violence, some sexuality and partial nudity, and brief strong language.