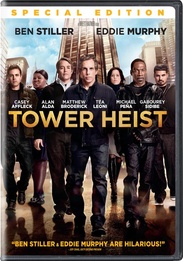 Ben Stiller and Eddie Murphy lead an all-star cast in Tower Heist, a comedy caper about working stiffs who seek revenge on the Wall Street swindler who stiffed them. After the workers at a luxury Central Park condominium discover the penthouse billionaire has stolen their retirement, they plot the ultimate revenge: a heist to reclaim what he took from them. Queens native Josh Kovacs (Stiller) has managed one of the most luxurious and well-secured residences in New York City for more than a decade. Under his watchful eye, nothing goes undetected. In the swankiest unit atop Joshâs building, Wall Street titan Arthur Shaw (Alan Alda) is under house arrest after being caught stealing two billion from his investors. The hardest hit among those he defrauded? The tower staffers whose pensions he was entrusted to manage. With only days before Arthur gets away with the perfect crime, Joshâs crew turns to petty crook Slide (Murphy) to plan the nearly impossibleâ¦to steal what they are sure is hidden in Arthurâs guarded condo. Though amateurs, these rookie thieves know the building better than anyone. Turns out theyâve been casing the place for years, they just didnât know it.