The IT Crowd: The Complete Fourth Season 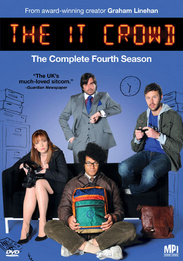 Geeky before geeky was cool (weâre looking at you, The Big Bang Theory), this is the original nerdy sitcom with two guys and a girl: IT geniuses Roy (Chris OâDowd) and Moss (Richard Ayoade) and their couldnât-change-a-lightbulb boss Jen (Katherine Parkinson). Stuck in the basement of a mega-corporation, the three friends spend their day helping out far-better paid superiors overcome computer meltdowns and other IT disasters. âAre you sure itâs plugged in?â and âHave you tried turning it on and off?â are usually their first lines of defense against corporate stupidity.

In Season 4, the lads try and fail yet again to socialize with the people upstairs, Jen tries to work her way up the corporate ladder by becoming Entertainment Manager and later pretending she can speak Italian and Moss proves a whiz on a TV game show.