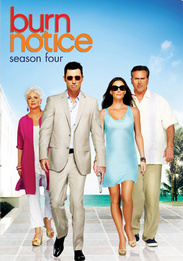 Combining deadly thrills and intricate plot twists, the explosive Season Four of âBURN NOTICEâ is the showâs hottest season yet! Master-spy Michael Westin is back, and this time, heâs joined by Jesse Porter, a no-nonsense counter-intelligence expert who has been burned himself. Along with go-to guy Sam and the dangerously sexy Fiona, the team takes on a barrage of outlaw biker gangs, drug dealers and a worldwide terrorist threat. As tension mounts, uneasy alliances are forged, friendships are tested, and a lethal game unfolds when Jesse vows to find and kill the one who burned him.