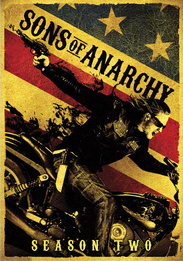 Hang on for this high-octane thrill ride that goes even deeper into the gritty world of an outlaw biker gang! Reeling from the combined pressure of an ATF crackdown and an unprovoked murder, the Sons face a far more deadly threat from a cold-blooded enemy who will stop at nothing to drive them out of Charmingâfor good. As Jax and Clay square off over questions of leadership and loyalty, lines are drawn and chaos reigns as the club threatens to destroy itselfâfrom the inside out.