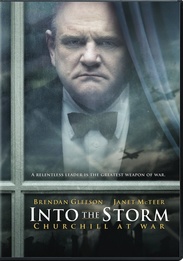 Continuing the story of Winston Churchill told in the EmmyÂ® Award-winning HBOÂ® Film, The Gathering Storm, Into the Storm offers an intimate look at the making of a nation's hero, when Churchill was at his most commanding and effective. The film shows how his prowess as a great wartime leader ultimately undermined his political career and threatened his marriage to his wife and lifelong supporter, Clementine.