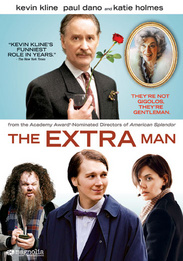 Louis (Paul Dano) is summarily dismissed from his job as a teacher following an awkward incident involving womenâs lingerie in the teachers lounge. In an effort to find himself, Louis moves to New York City, in hopes of becoming a full-fledged writer. He answers a listing for a room and meets Henry (Kevin Kline), a strange, eccentric writer who lives his life quite peculiarly. Fascinated by Henry, Louis agrees to move in. Henry is quick to begin to teach Louis how to have a glorious social life in New York, by becoming the âextra manâ to aging billionaire widows.