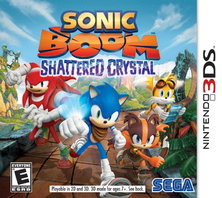 Serving as a prequel to the stories revealed in the TV series, Sonic Boom delivers a new Sonic experiences with collaborative gameplay at its core. Sonic and friends -- Tails, Knuckles, Amy, and the newest member of the team, Sticks -- will work together as they face their most powerful enemy yet: Lyric, a giant and monstrous snake-like creature from an ancient race. Together, they must prevent Lyric from powering his army of robots and carrying out his plan to destroy the world. Sonic Boom: Shattered Crystal is a standalone adventure that shares key characters, events and lore of the Sonic Boom universe with exclusive environments and characters. For the first time ever, gamers will be able to take on the role of Sticks, the newest member of the team who will play an integral role in the story after her best friend Amy gets kidnapped by the ancient villain Lyric. While the Wii U version is focused on action-adventure and exploration, Sonic Boom: Shattered Crystal will place a bigger emphasis on platforming and puzzles. Additionally, unique collectibles featured in the Nintendo 3DS version will unlock special content on Wii U via Wi-Fi connectivity.